In chapter 7 we looked at the most important features and characteristics of a pneumatic cylinder:

In this chapter we will cover:

Compressed air can enter the cylinder at a very high speed. If the piston hits the cap or head at high speed, it can lead to damage. In order to avoid that, most cylinders are equipped with end-of-stroke absorbers / cushioning’s, which reduce the piston’s speed shortly before it reaches the cap and thus reduce shock.

There are two ways to reduce the shock:

The easiest way to avoid a hard shock is to assemble some kind of soft material between the piston and the cap/head. It comes in form of a ring which is usually made from polyurethane and thus offers very good shock-absorption. This design is often times used for cylinders with rather small diameters where the strain is not that high. The same kind is used for compact cylinders where the small dimensions do not allow any larger devices. The flexible shock absorbers are highlighted with red arrows in the graph below. 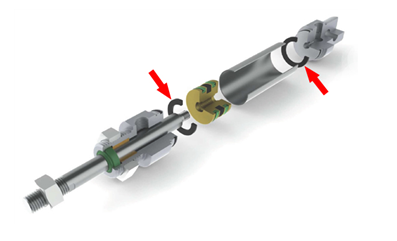 The adjustable pneumatic cushioning is used if it comes to stronger forces due to higher speeds or bigger sizes.

This way of reducing shock is efficient as well as wear-free. During the last 10 to 50 mm of its travel (depending on the size of the cylinder), the piston builds an air cushion inside the cylinder. The degree of cushioning (= speed reduction) can be adjusted at both ends of the cylinder for both sides respectively. The mechanism is a flow-regulating valve.

Both tie-rod and profile cylinders offer that feature, according to ISO 15552. Rodless cylinders often offer it, too. Round cylinders (ISO 6432) of larger diameters, as well as special cylinders, can be equipped accordingly.

The components of the cushioning are marked with red in the graph below. 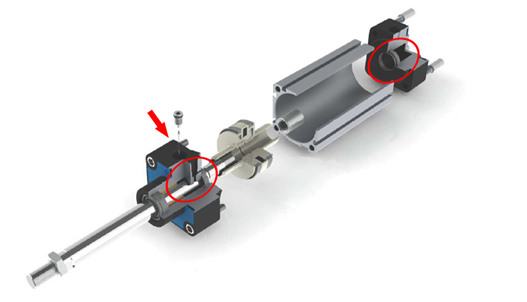 Below you can learn more about the function of the adjustable pneumatic cushioning: 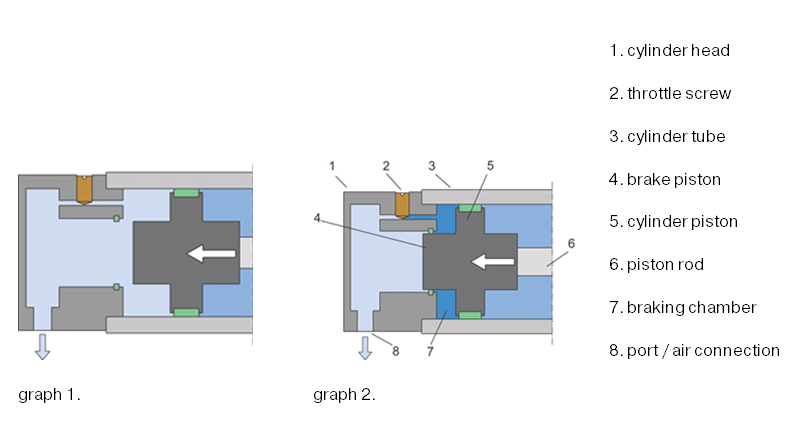 During the movement of the piston, the compressed air exhausts through the port (8) (graph 1).

Before the piston reaches the head, the brake piston (4) – which is part of the cylinder piston (5) – prevents the air within the braking chamber (7) from exhausting through the port (8) (graph 2). The air trapped there can only exhaust through a much smaller orifice. The orifice can be adjusted with the throttle screw.

Inside the braking chamber (7) pressure goes up and generates a temporary air spring. Its resistance remains there until the air has completely exhausted through the throttle screw (2).

CAUTION! The throttle screw can only adjust the degree of cushioning / speed of the cylinder piston for the last 10 to 50 mm of its movement.

How to adjust the speed of a cylinder in general will be covered later in this chapter.

In order to detect the position of the piston, sensors which are triggered by a magnetic field are assembled onto the pneumatic cylinder. The cylinder piston is equipped with a magnet so that the sensor can receive a signal. 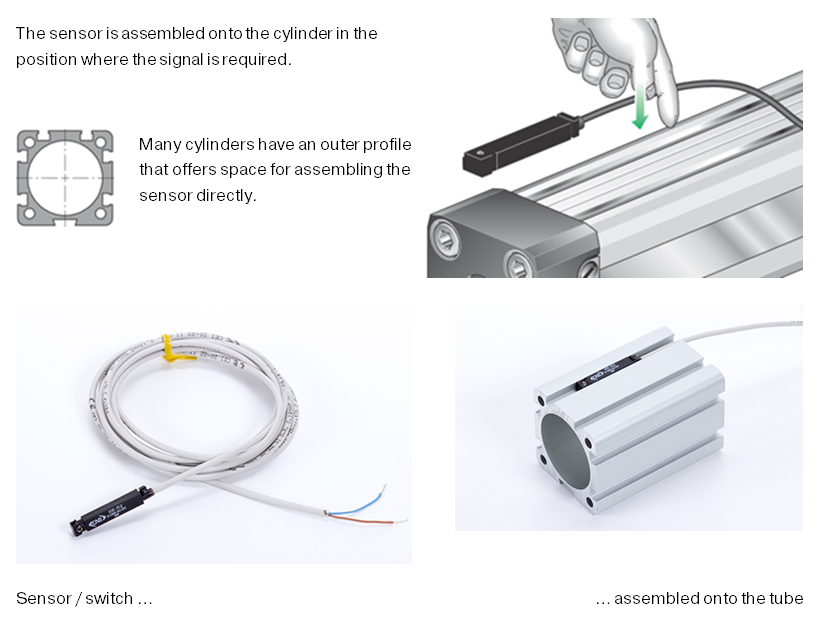 There are two different types of sensors / switches:

REED switches consist of two ferromagnetic nickel-iron wires. They are packed together in a glass tube filled with a noble gas and are made from a magnetic material. 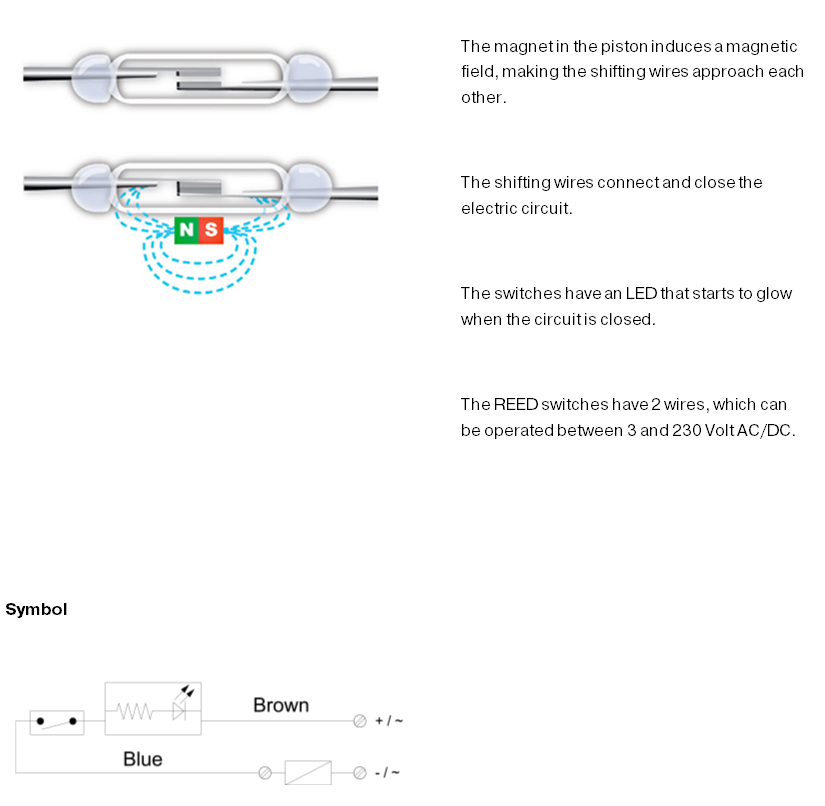 The function of the inductive PNP switch is based on the principles of a bipolar junction transistor. When the magnet that is built into the piston gets close to the switch, it gives a well-defined signal. The switch can be used ‘normally open’ as well as ‘normally closed’.

An LED displays the condition of the switch.

PNP switches have generally 3 wires. They work within a voltage range of 5 to 30 V DC. 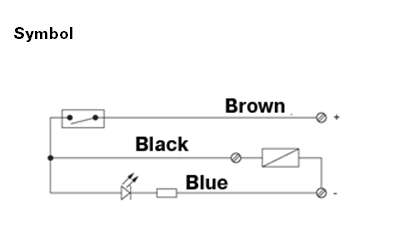 Advantages of the PNP switch in comparison to the REED switch:

To control the speed of a pneumatic cylinder (actuator) over the entire stroke, flow regulators or flow-regulating silencers can be used.

To control the speed, we regulate the exhaust air flowing out of the cylinder chamber. We thereby avoid an immediate exhaust. The air is in both chambers available as long as the piston has reached the end position. The movement is therefore very smooth.

CAUTION! In order to set the speed of the cylinder and to get a smooth movement, it is always the exhaust air that has to be controlled.

To do this there are different products available for speed regulation:

In order to allow compressed air to flow into the cylinder at full speed, while allowing it to exhaust slowly, we use a one-way flow control valve. 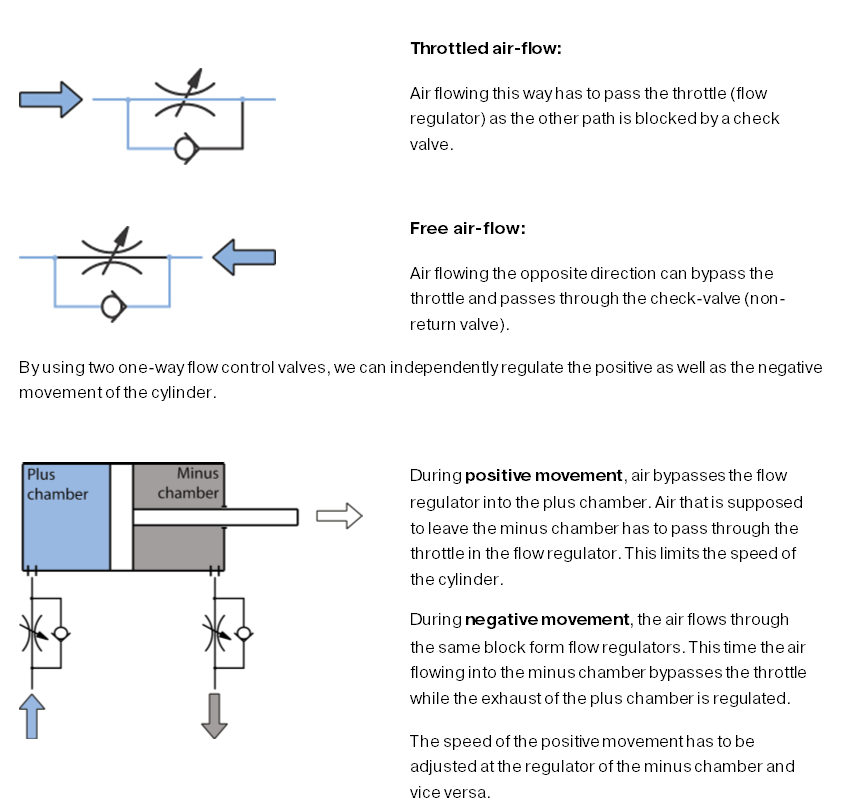 There are many different designs of flow-regulators available and their sizes differ depending on the manufacturer.

Function fittings are screwed either directly into the cylinder or into the valve. Therefore there are two different types, one for each area of application. 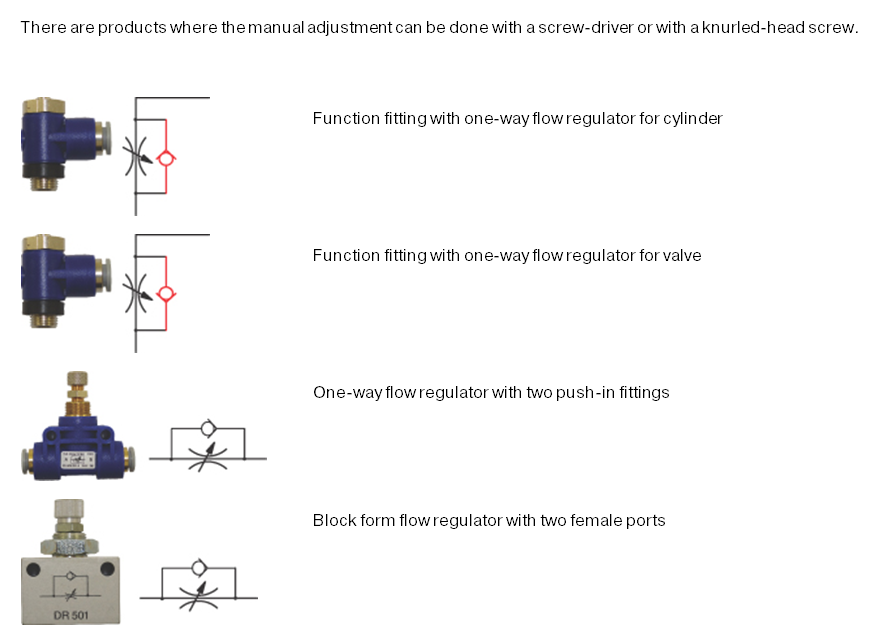 Below you see three different ways of speed control for a double-acting cylinder, with air supply via a joint FRL.

The double-acting cylinder C1 is controlled by the single solenoid 5/2-way valve S1. As soon as the valve is actuated, air flows into the Plus chamber of the cylinder via F1.1. The air flow is not restricted by F 1.1. Simultaneously, air needs to exhaust from the Minus chamber of the cylinder via F1.2. This flow is restricted by F1.2. Via the directional valve S1 (port 3), the air is finally exhausted. As soon as the electric actuation of the directional valve S1 is taken away, the valve switches back to normal position. Air flows at full speed via F1.2 into the Minus chamber of cylinder C1, while the air in the Plus chamber exits via F1.1 and S1, exhausting at port 5 of S1. This flow is restricted by / adjusted at F1.1. The positive movement of the cylinder is regulated at F1.2, the negative movement is restricted at F1.1. F1.1. and F1.2. can be screwed either into the cylinder or the valve, but the correct version has to be selected either way!

The double-acting cylinder C2 is controlled by the single solenoid 5/2-way valve S2. The speed of the cylinder is adjusted at flow control silencers F2.1 and F2.2. , which are screwed into the valve. For positive movement, the directional valve S2 needs to be actuated. Air streams at full speed from port 1 to port 4 of the valve and into the Plus chamber of cylinder C2. At the same time air needs to exhaust from the Minus chamber of the cylinder. The air streams into port 2 of the valve S2. Its flow is restricted by F2.2 before leaving the valve S2 at port 3. For negative movement, the valve switches back into standard position. The Minus chamber is supplied via port 2 of valve S2. The exhaust from the Plus chamber is restricted by F2.1 in port 5 of the valve S2.

The double-acting cylinder C3 is controlled by the single solenoid 5/2-way valve S3. For an extremely quick positive movement after actuating the valve, the Minus chamber is exhausted by the quick exhaust valve F3.2.; the exhaust air does not pass the directional control valve S3. For negative movement, the valve S3 needs to switch back into normal position. The exhaust air of the Plus chamber has to go through the one-way flow regulator F3.1

The most common cylinders in pneumatics have been standardized, the target being maximum compatibility between products of different manufacturers.

The most common cylinder standards are: 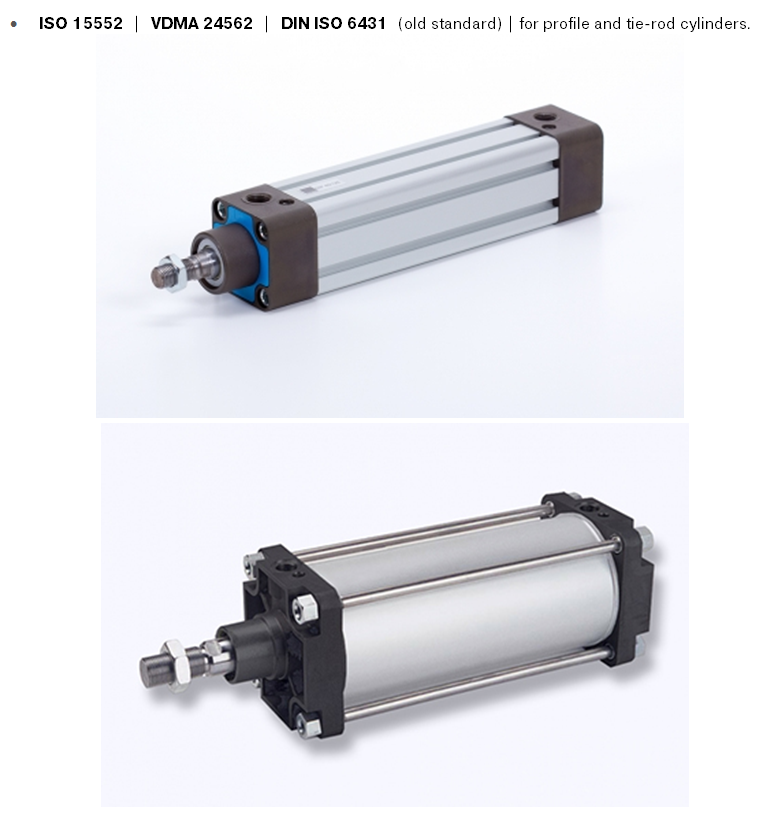 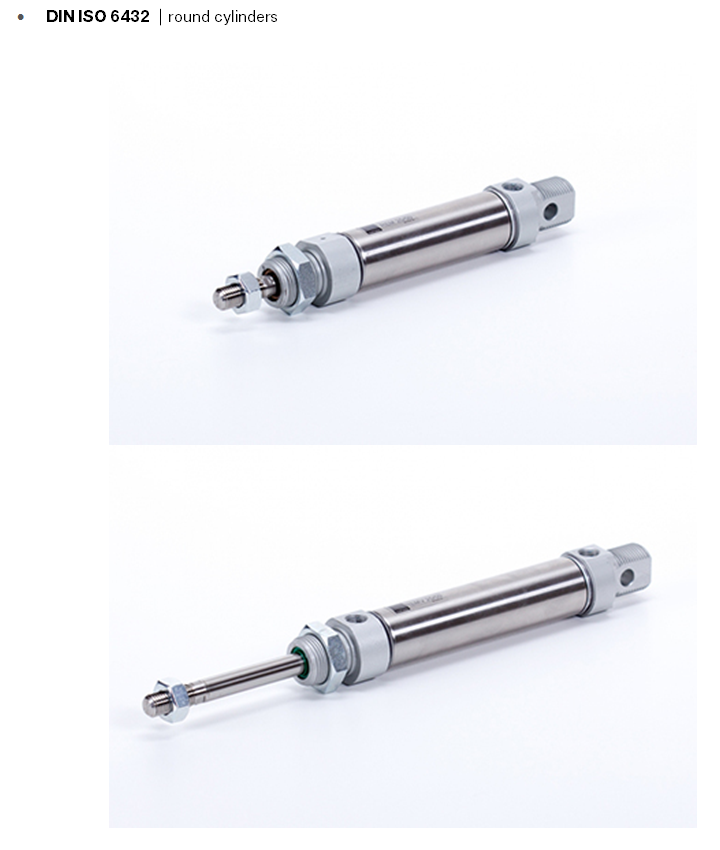 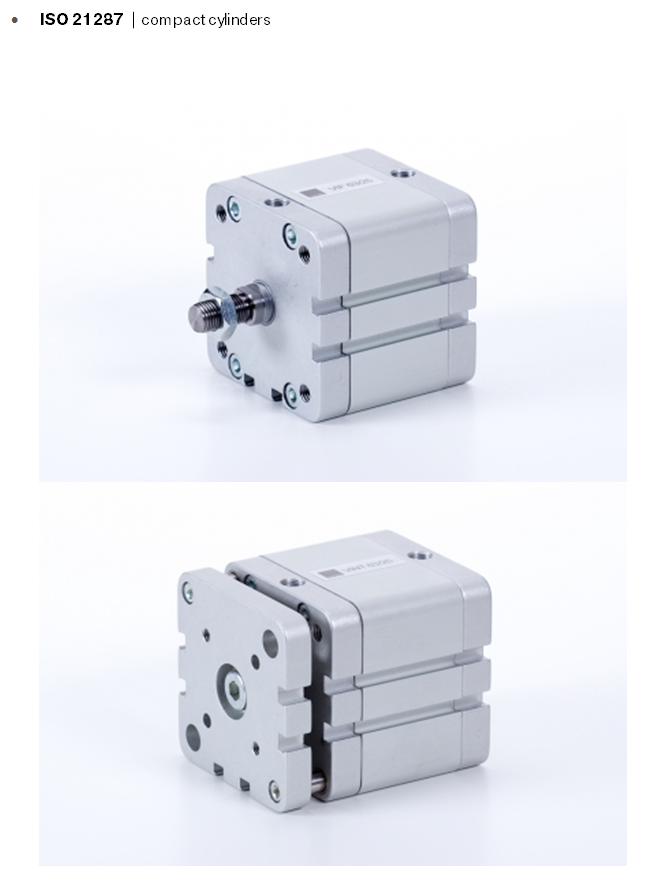 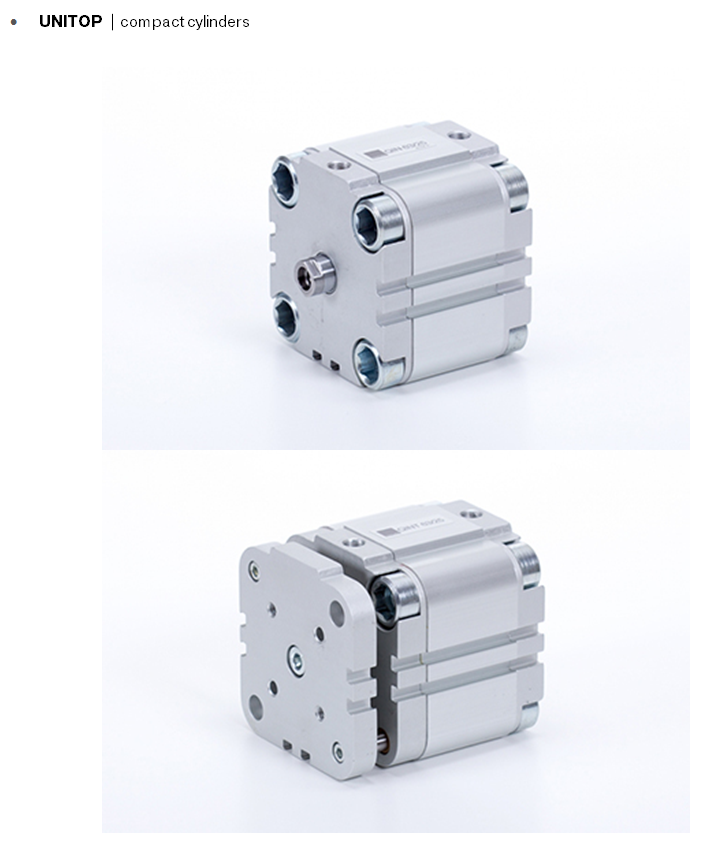 The ISO 15552 cylinders in the HAFNER range have the type number DIL and DIP (for products with a run- through piston rod: DBL and DBP) 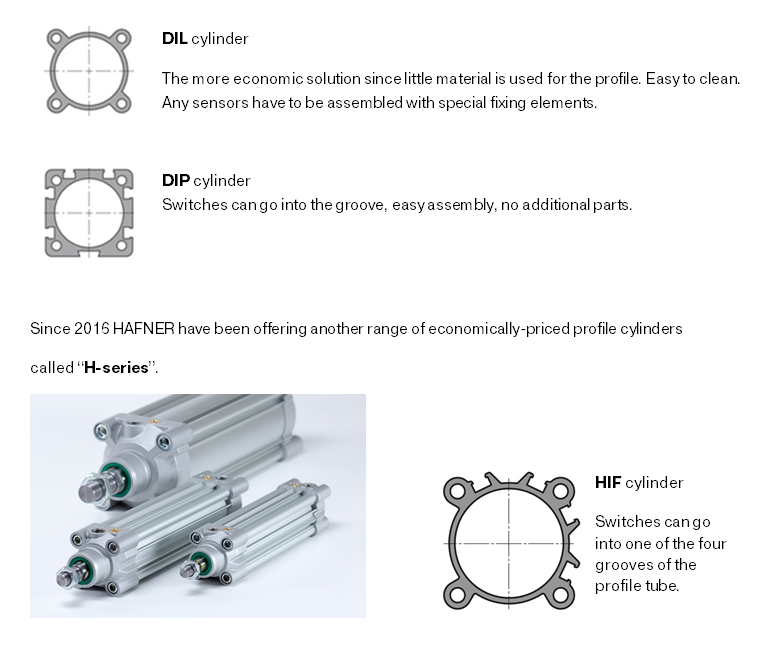 Materials used in an ISO 15552 cylinder of the D-series: 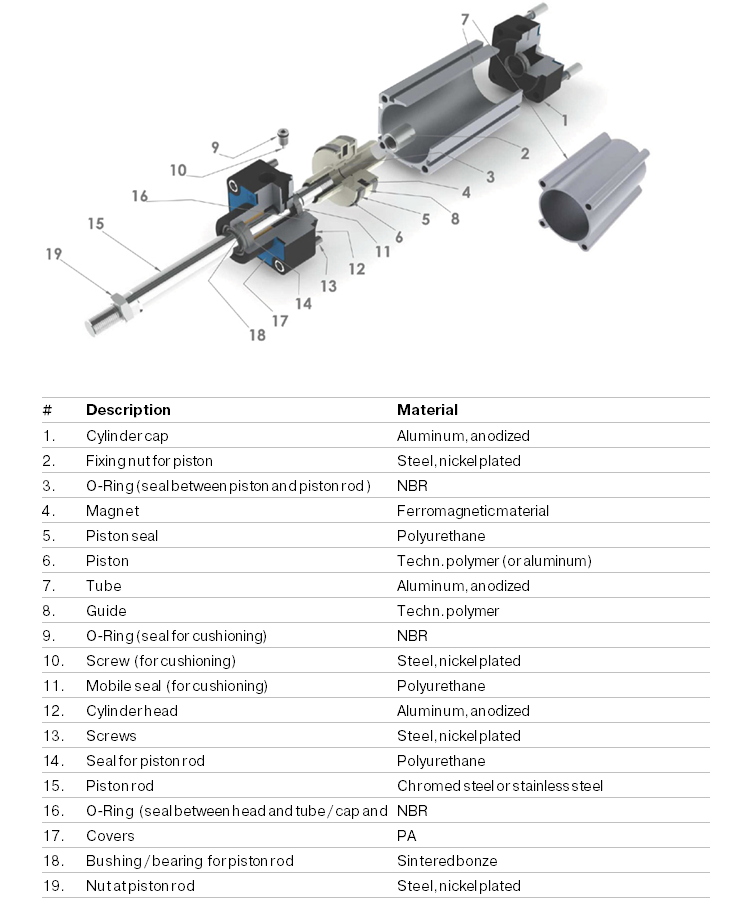 Due to high speeds, long strokes and high frequencies the seals can wear out faster than other parts. Therefore we offer spare-part kits for the cylinders. The spare-part kits contain all potentially worn-out parts. 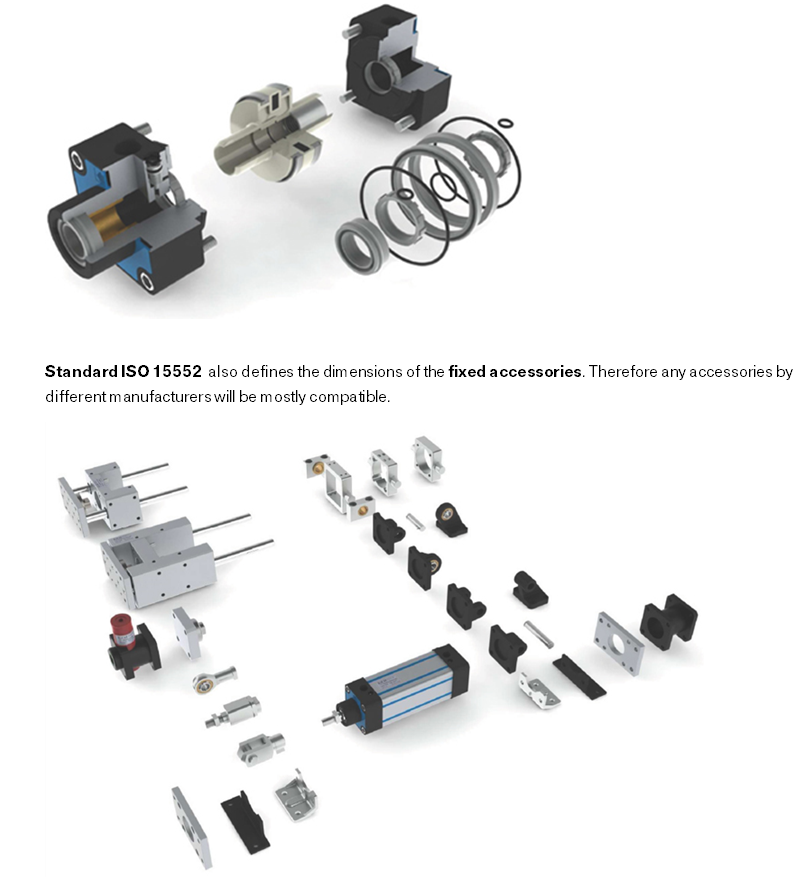