The description of directional valves is standardized by DIN ISO 1219.

IMPORTANT! The ISO symbols display only the function of the valves. They do not give any further information about the design, flow, orifice size, etc.

Basics of the ISO symbols: 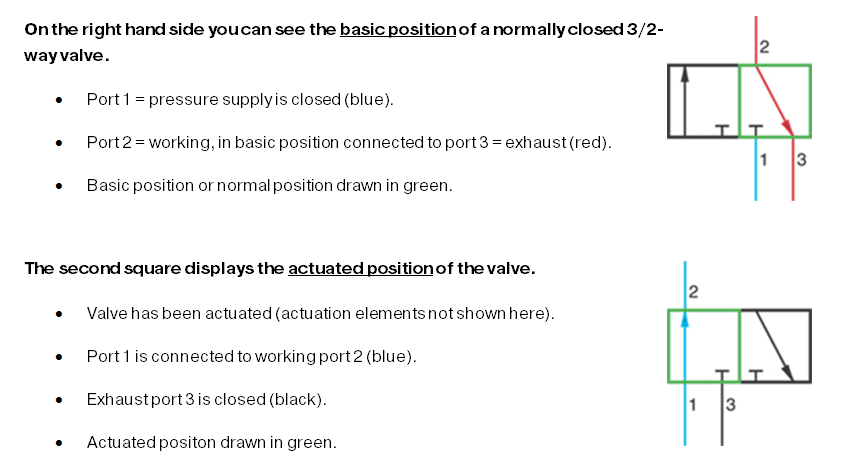 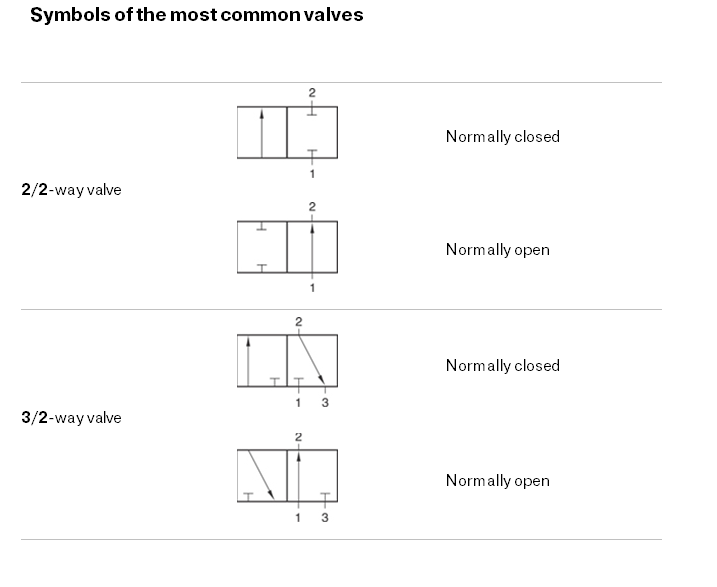 Symbols of actuation elements and resets

Apart from the squares showing the valve's function, the symbols for its actuation elements and elements to reset/return it are shown on the left, respectively right side of them. 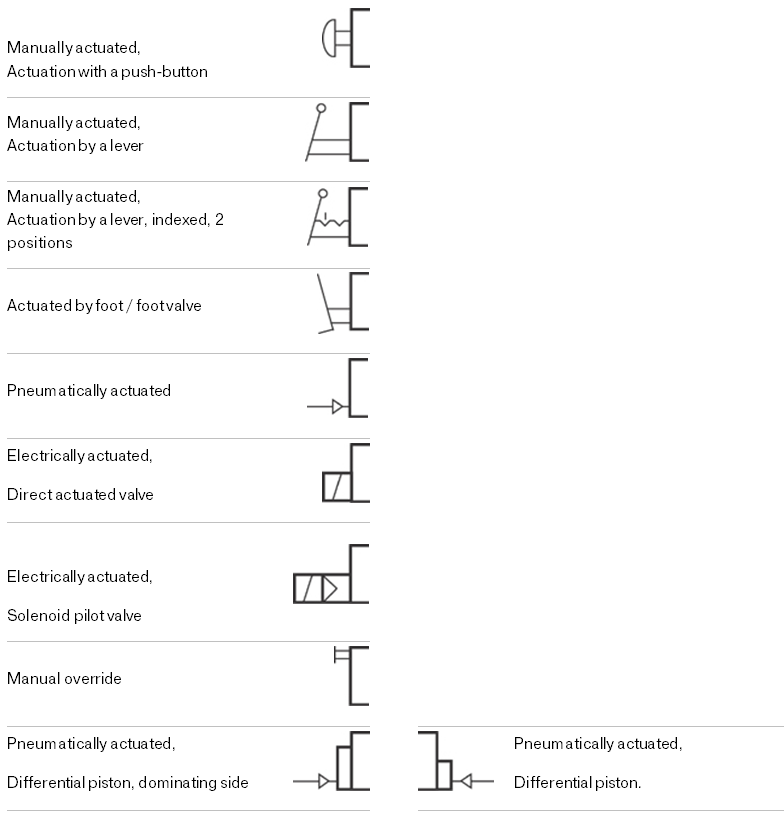 All the ports in the valve are counted through. The numbers indicate the function of the port. The numbers always appear on the square for the valve's basic/normal position. In case we talk about a valve with 2 stable positions, the numbers are shown for the „implicit standard position“.

Basic position = normal position is the position the valve is in without actuation. 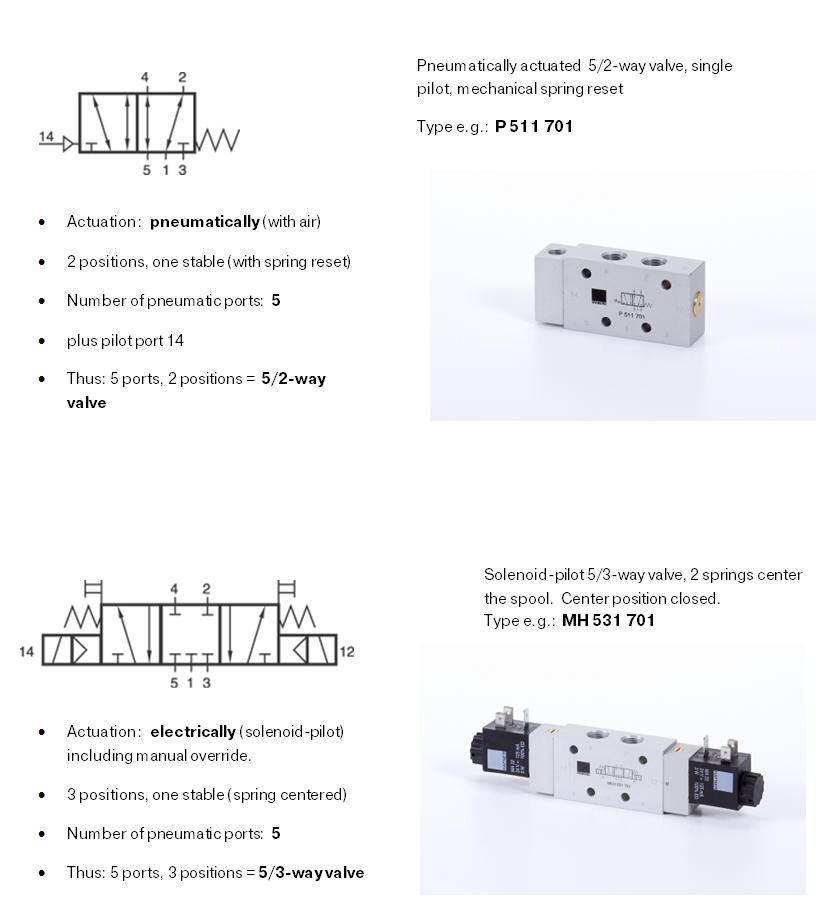 Looking at the following circuits you can see potential ways for using different types of directional valves. 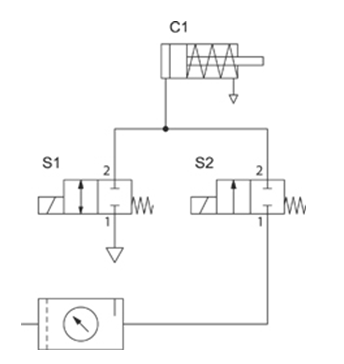 (The symbol at the bottom displays an FRL-unit (filter, regulator, lubricator). The functions of cylinders as well as of air-preparation units will be discussed in a later chapter.)

3/2-way valves are mostly used to control single acting actuators. They can be normally closed or normally open. In the scheme below you can see two applications.

When the valve is actuated, air flows from 1 to 2; the piston rod of the cylinder is moving to outer position.

When the valve is de-energized, it switches back to normal position and the mechanic spring in the cylinder drives the piston rod back.

As soon as valve S2 is de-energized, air exhausts from port 2 to 3. Valve Y1 switches back into normal position because of the built-in mechanic spring. Compressed air in valve Y1 flows from 1 to 2 and the cylinder's exhaust from 4 to 5 as the piston rod moves back in.

In the example below a manually actuated valve (S1 or S2) controls a double acting cylinder (C1 or C2). Additionally, in order to control the speed of the cylinder, flow control silencers are in use.

The major difference between the 4-way and the 5-way valve is that the 4-way valve offers only one exhaust port. Therefore the speed of the piston rod moving in or out cannot be controlled independently as the two chambers of cylinder C1 are exhausted through the same exhaust port 3 of valve S1.

As for the 5/2-way valve (S2), the two chambers on cylinder (C2) are exhausted through separate exhaust ports (5 and 3). This offers the possibility to regulate the speed of the piston rod independently. 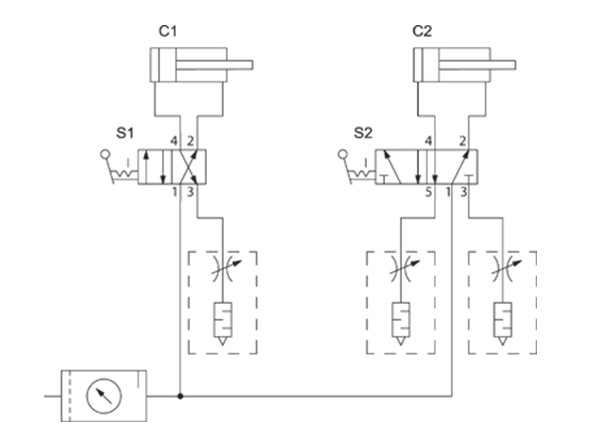